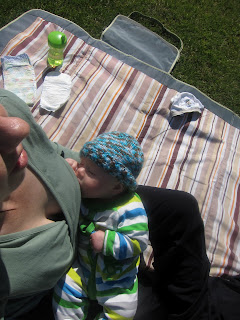 There has come a time during my breastfeeding relationships with each of my sons that something small yet extraordinary has happened (beyond the other extraordinary things that happen when one breastfeeds). Long after the cracked nipples have healed, when engorgement has settled, and several weeks after I feel like we've got breastfeeding down pat, I stop 'paying attention' to the process of breastfeeding and start taking for granted that it has reached a comfortable plateau of competence: I know when he's hungry, he knows I respond, and we both pretty much know what to do about it.

But just when I stop really actively paying attention to breastfeeding (and can start walking while breastfeeding, and feeding him easily in a wrap, I am made aware of the process again because of a tipping point between how much I contribute to breastfeeding relative to my infant son.

That moment came last week. I was fumbling in the dark to help my 3 month old latch on in the middle of the night. I couldn't tell where my nipple was (it's never where I left it), and I couldn't quite see where my son was veering and bobbing his head. I was readjusting both my breast and my babe in an awkward little dance when, seemingly out of nowhere, bam, a latch on.   It was so unexpected when it first happened because until then, I was the one in control of ensuring my son was close enough, high enough, turned towards me enough.  I knew the moment that he would latch on because his success depended on me.

My son, of course, has always been a part of this jig (it takes two, there is no doubt). He needed to do the actual latch on, he coordinated his tongue, his jaw, his suck, his breathing. He needed to be hungry or want soothing.  But it was up to me to make sure all the other pieces were in place. Well not anymore. As long as my breast is somewhere in the vicinity, my son can hone in like SONAR, and stick the landing like a gold medal gymnast. Like two magnets snapping together.  Because he now has head control, awareness, and conscious intent to get to that milk, my son has added one more little component to his side of the breastfeeding effort.

What a cool moment. In describing it it almost becomes trite.  It seems so 'minor' that it should be inconsequential, but it marks a pretty significant shift in the way I think of my son. It's like watching something as seemingly simple as the CanadArm in action --simple two sides fitting together like they were meant to, but so much goes into making it happen.  It is a moment for me to acknowledge that the ever so gradual transition from infant to independent adult has just made one small little shift.  One small step for baby, one giant leap for motherhood.
Posted by Heather Boyd at 5:58 PM